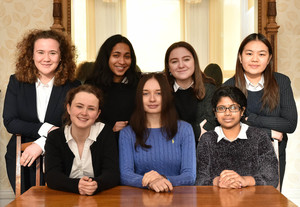 The seven young women are themselves drawn from across the globe and were led by Russian spokeswoman Ludmilla Mitrofanova who only came to the U.K. three years ago, one of her first roles at Altrincham Catholic grammar school to set up the United Nations club.

In the delegation were also Italian exchange student Giudita Iorio, British Indian Jiya Jigo, Ishvarya Sathiyamoorthy who was born in India, Michelle Shum, who was born in England of Chinese and Hong Kong parents and Alice Kenny and Aoife Halpin, who are both of Irish descent.

Ludmilla said: “It is no accident that we sent a multi-national team. It is a big commitment to give up a full weekend to take part in the Model United Nations convention and our team all felt a particular reason to take part.”

The annual event at Manchester High School for Girls saw each team member allocated a hot topic then debating the case as seen from a particular country’s standpoint.

Giudita Iorio said: “It is very informative to research another country’s view point, free yourself from your own political bias and debate with the representatives of other nations.”

Giuditta added: “The United Nations is under increasing pressure with President Trump cutting funding, and as a young person you simply feel powerless, but the event reaffirmed just what might be achieved if we continue to work together.”

Ludmilla was commended for her contribution and Alice Kenny gained a special mention, with all the girls earning certificates for participation.

Head of Loreto’s Sixth Form Rob Latham who accompanied the young women, said: “We would like to thank Manchester High for staging such a fantastic event and are proud our girls so wonderfully represented all our core values, particularly our belief in Internationalism.

Pictured on the front row are Alice Kenny, Ludmilla Mitrofanova, and Ishvarya Sathiyamoorthy and on the back row are Giuditta Iorio, Jiya Jigo, Aoife Halpin and Michelle Shum.