An Introduction to Sixth Form 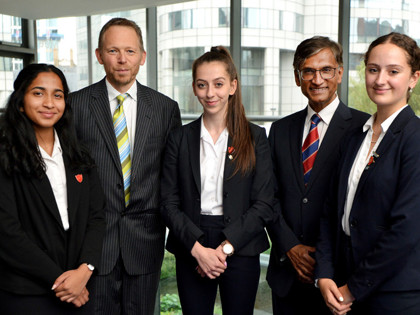 Being at Loreto means being part of a community that encourages and empowers young women.

There are currently around 280 students in Sixth Form, studying almost 30 A Level subjects, all of which are entry qualifications to university. Our A Level results are outstanding and the school is consistently in the top 100 schools in England for GCSE and A level. Staff are rigorous in their academic approach, expecting high standards and leading students on to become independent learners.

Virtually all our Year 13 students go on to university, with almost 2/3rds consistently entering the Russell Group of higher educational establishments, including Oxford and Cambridge and Ivy League institutions. Those who do opt for employment post-18 have little difficulty acquiring the kind of position they desire and students have been successful on very competitive school-leavers’ programmes such those for as IBM, KPMG, PWC and Ernst and Young. In our most recent Ofsted, the Sixth Form at Loreto was judged "outstanding", the highest category awarded, in all respects: effectiveness and efficiency, achievements and standards, personal development and well-being, quality of provision, and leadership and management.

Loreto Grammar Sixth Form is a Catholic community in which all the sixth formers take part; students have daily opportunities to develop their faith through prayer, religious assemblies, Masses and the through following the General R.E. Programme, Aletheia. We do not expect applicants to the Sixth Form to be Catholic, but we do expect them to support the Catholic ethos of the school. Our values are centred in God, rooted in gospel values and derive from the vision of Mary Ward and in this spirit, we challenge the students to adopt a wholehearted and determined approach to pursuing their goals, making a contribution and improving the world around them.

Our wide-ranging Tutorial Time Programme, presented by Form Tutors and external speakers, covers many areas of Sixth Form life, as well as preparing students for independent living, but with a particular emphasis on careers advice and choosing a university. This is backed up by our Careers Department and Connexions advisor service as well as a transition programme in June, Working Onwards Week (WOW!) which is specifically devoted to preparing for post-18 plans. We have a Senior Tutor with responsibility for UCAS, who is available to students in form time, and students are afforded the opportunity to participate in many career-linked programmes, such as Barclays Lifeskills, Headstart, as well as bespoke Higher-Ed preparation days on the campuses of regional universities.

As well as high academic standards within a structured framework, we offer our students the opportunity to participate in a wide variety of enrichment programmes, some leading to external validation. The Extended Project Qualification is a popular choice, as is voluntary work in the local community and in primary schools. We are also part of the Manchester consortium of sixth forms leading the Cambridge HE+ Programme, which provides a series of masterclasses to extend students’ learning beyond the A Level curriculum and prepare them to study at competitive institutions of Higher Education.

Student support is a very strong feature of Loreto Sixth Form. Each student is in the care of a Form Tutor, her first port of call for information, advice and guidance. We are also fortunate in our Chaplain, who is available to students at all times. Tutors work closely with the Director and Deputy Director of Sixth Form, who monitor students’ academic progress, attendance and wellbeing. Students are involved in monitoring their progress with their tutor, through target-setting and regular progress checks. There are the usual Parents’ Evenings, and Year 12 and Year 13 will each receive an interim report as well as a full written report.

Sixth Form students at Loreto Grammar School are leaders of the school community and hold a range of responsibilities. A Senior Prefect Committee is led by the elected Head Girl and her Deputies and the various representatives lead teams of students from Years 7-12. Year 12 students work as Form Prefects for Key Stage 3 forms and also have the opportunity to train as mentors. We have an active and dynamic School Council and Sixth Form Subject Representatives who work with Heads of Department and help to run extra-curricular clubs.

Amongst the facilities we offer to our Sixth Form are twoCommon Rooms, a Study and Seminar Room, a Café for the exclusive use of Sixth Form and staff, a dedicated library level and BYOD technology, giving students the freedom to use their own personal computing devices in school.

We strive to ensure that a helpful and friendly relationship between staff and students makes Loreto a congenial place in which to study and in which to relax among friends. As a Loreto school, we are part of an international community of schools founded by Mary Ward everywhere from Australia and Mauritius to India as well as the UK and Ireland. Every two years, Sixth Formers from Loreto Altrincham have made two trips to our sister school in Kolkata in India to work with the children there and many of them found this to be a truly life-changing experience. The next trip is planned for summer 2017.

As an IBVM school, we are also represented at the United Nations in New York. Sixth Form students made a trip to the UN headquarters in 2016 on the Social Sciences New York and Washington trip.

Any girl who wishes to join our Sixth Form must satisfy the school’s entry requirements and must be willing to sign the Sixth Form Home School Agreement. Our Admissions Policy is published in on our main school website, and in our Sixth Form Prospectus. Further information may be obtained by telephoning or writing to the Director of 6th Form, Mr R Latham.

The Art of Isolation