Loreto Grammar School staged its own private view to showcase the stunning work of its current generation of young artists.

The Catholic grammar school in Altrincham has record numbers taking both GCSE and A Level art as their Head of Art Nicky Martins said, “because they have been inspired by a host of predecessors who are currently making a lasting impression in Britain's world class creative industries.”

Nicky added: “They have seen scores of young women progress to St. Martin's, The Chelsea School of Art and the Courtauld Institute among many leading art colleges nationwide and then progress to take up challenging roles in film, fashion, design, architecture and education and they want the same opportunities.”

Nicky added: “Our objective is to get them to take ownership of their work and to work through and solve problems intelligently and I think it shows in the quality and range of the work how much our girls enjoy that challenge.”

Among the work exhibited was a painting by Megan Murphy, 16, of her sister Orla, 11, with a scowl on her usually angelic face that would scare the crows.

Megan, 16, from Altrincham, said: “I worked off a photograph of Orla with one of her frightening frowns which she reserves for what she deems to be the worst case of injustice against her and in the backdrop I used quotes from famous freedom fighters such as Milala and Barrack Obama to accentuate my message that we must all fight, even the youngest in our community, for equal rights for all.”

Orla, who is a Loreto pupil in Year 7, said: “I do frown and it does frighten people, but it it's only when I think something is unfair.”

Also exhibiting her work was Ellie Hughes, 16, of Timperley, who wants to be a landscape architect, better utilising the space between built structures. She said: “My first project was about Manchester and I concentrated on foliage and plant life and have been inspired by the city's landscape architects who are beginning to make much better use of the public spaces in the city.”

Ailish Gaughan, 14, who wants to study Art at GCSE and then at Art College summed up the mood. “I want a career where I enjoy coming into work every day and have the freedom to express myself, English, Maths and the Sciences are good and I am not saying they are not entertaining, but Art has an incredible scope.” 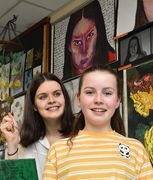 Megan with Orla Murphy and her portrait of her younger sister.