Speaking at the Bridgewater Hall in Manchester on a night when the heavens had opened, Monica who is one of the world's leading authorities on meteorites and is part of an international drive aiming to discover the source of life, said: “Heaven is on earth, it is inside you and for that matter so too is hell.”

“People often ask how do I marry my belief in God with my research as a space scientist and I say just as on earth when you see a landscape or a beautiful seascape you can see the work of God, so you can and when you examine the stars and see the wonder of the universe.”

She added: “Most importantly, though, God is inside us. God is what inspires us to make great music, great poetry and do scientific research, and God is what should inspire you to make a contribution to the greater good. You have responsibilities to others as well as rights.”

Monica, who chose Bat Out of Hell by Meatloaf, alongside Smetner, Simon and Garfunkel and Gilbert and Sullivan on Desert Island Discs last year, was keen to emphasise the renewal of the obligation of service to others.

“It's a key element of the Catholic doctrine and was exemplified by Sister Teresa of Kolkata, where I know Loreto has a mission and where I know many Loreto girls from your school have worked.

Sister Teresa dedicated her life to the service of others and I ask that you too look to see what you can do for others too, your family, your community as well as for yourselves.”

She added: “In a time of political crisis in the country and intentional crisis abroad we should be doing more. This country is incredibly wealthy, but our response to the migration of refugees has been negligible.”

Dr. Grady graduated from the University of Durham in 1979 and then went on to complete a PhD on carbon in stony meteorites at Darwin College, Cambridge in 1982. She went on to curate the UK's national collection of meteorites at the Natural History Museum and has built up an international reputation in meteoritics, publishing a series of papers on the carbon and nitrogen isotope geochemistry of primitive meteorites, on Martian meteorites, and on interstellar components of meteorites. She was appointed a Fellow of the Meteoritical Society in 2000, a Fellow of the Institute of Physics in 2012 and a Fellow of the Geochemical Society in 2015.

She added: “There are millions upon millions of stars out there most of which will have their own planets and it is incredibly arrogant of mankind to think that this planet harbours the only form of life. It may not have two arms, two legs, a nose and eyes, because that depends on infinite possibilities, but there is more life in the universe.”

Loreto Grammar School Headteacher Jane Beever who is pictured with Chair of Governors Dr. Stephanie Blower and Loreto girls India Hayes and Rosie McDonagh, said: “Dr Grady is a wonderful role model for young women; a visionary whose work is based on both minute detail and a stunning imaginative capacity, and whose research has confirmed her belief in the power and beauty of God.” 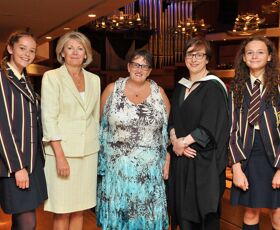