South African philosopher and academic Gerald Pillay told a packed audience at Loreto Grammar School’s speech to have faith in the future.

He added: "The very first academies at the birth of the Renaissance were Cathedral Schools and they started from the premise that humanity consists of body, mind and spirit. "They taught a range of disciplines which aimed to educate the whole person. There was always a focus on art and music and at the heart of those subjects is an expression of human spirituality."

He told a packed audience, which had overflowed to one of the Bridgewater's conference halls to watch on a specially mounted cinema screen, "Your education is all important to you and you must take full advantage of it because in its lies your liberation."

Gerald also spoke of his upbringing and the liberation in South Africa which came with Nelson Mandela’s historic peaceful revolution.

Loreto's glittering awards night focused on the leading Altrincham faith school's wonderful year inside and outside the classroom.

Mrs Beever said: "Our guest, the distinguished philosopher and academic Gerald Pillay, personifies the inner strength we want to instil in our girls.

His example as well as his teachings set him as a wonderful role model." 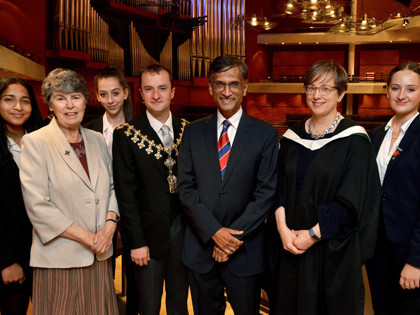