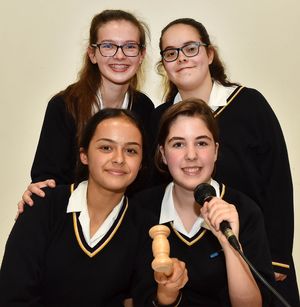 Loreto Grammar School orators courted controversy when they showcased the power of persuasion in their annual debating challenge.
All Year 8 and 9 girls at the leading Altrincham faith school spend the summer terms arguing challenging topics to fine tune the art of argument.
This year after six previous rounds two top teams argued for and against the motion “Spending money preserving historical monuments is a complete waste of time.”
Winning proposition speaker and would be lawyer Mia Gresty, 14, argued in favour of what to many might seem the indefensible.
“Look at Buckingham Palace and Grenfell Tower and the disparity between what was spent on restoring one and the other.”
The second speaker for the proposition, Annabel Harper, another who also hopes to train in Law, weighed in too, “so many old buildings have been built on the proceeds of slavery or, indeed, by slave labour, for example, the White House and the Pyramids of Giza.”
On the counter side Abigael Riley, 14, the opposition, argued that older buildings are now used as libraries and museums, that funding to preserve them is relatively minimal and that many buildings such as Auschwitz are essential reminders of our past. Her team-mate Grace Whittaker added that buildings ‘are the tangible remains of human history.’
However, despite that common sense it was those who would leave history to rot who persuaded a panel of former winners and expert orators to win the day.
Mia explained how it was done: “You have to balance ethical points and statistics to prove your case and, most importantly, you have to engage the audience with comedy.'
Head of English Mrs Hilton-Jones said: “We want our girls to tackle interesting and complex subjects head on such as ‘Reality TV should be banned” or “No one under the age 12 should have an IPhone,” all topics hotly contested this year. Helen McKay, Loreto's Key Stage 3 English Coordinator, who organised the event, said: “It breeds confidence, encourages articulate, logical debate and prepares the girls for many of the challenges they will face later in life.”
Helen continued: “The secret is in the preparation and planning a logical structured argument using expansive, creative vocabulary, “One of the girls involved said to me afterwards “I’m glad it’s over- now I can have my evenings back” that’s how much work they put into the project.
Back to News List