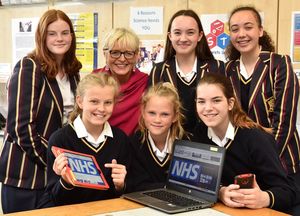 Loreto’s young engineers are looking to add to the Altrincham School’s roll of honour in the final of TeenTech this summer.

Two teams of three girls each will compete in the 11 to 16 category, one promoting a self-sufficient airport in the Design and Construction section and the other an app to reduce waiting times in your area’s A & E departments in the Research and Information Literacy section.

The girls started their projects in class but then have worked tirelessly in their own time and in former STEM Teacher of Year Elaine Manton, popular lunchtime clubs, with Elaine again being shortlisted this year.

Loreto Grammar won the first award in 2013 going to Buckingham Palace to receive the accolade and since its inception have won in 10 major categories with two commendations, also being featured on BBC Breakfast TV’s spotlight on young innovators.

Lauren Cuthbertson, 12, from Stretford, who with Isobel Barton and Elizabeth Moore, came up with the app to prioritise the best waiting times in A & E, summed up the purpose.

“We sat down together and brainstormed the idea. We all wanted to solve a problem that would have a positive impact on the lives of others.”

The older girls have been working on ideas to create an energy self-sufficient airport using among a host of innovations; kinetic flooring, voltaic windows for solar power and oval runways to minimise pollution during taxying.

Amelia Beddy, 15, from Altrincham, who with Emily Gillard, Caitlin Macfarlane and Beth Albiston, came up with project, said: “Coming up with the idea was the fun element, turning those ideas into workable solutions has taken a lot of work.”

The girls have been helped by TeenTech mentors, supporters from local industry and the by parents, as Elaine Manton said “to develop ideas way beyond their years.”

Elaine added: “When I first started teaching very few women went into careers in Science, Technology Engineering and Maths, but it is changing and though progress has been slow, it is steady, and more and more young women are excited about careers in industry.”