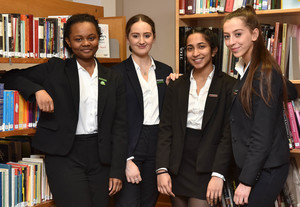 Loreto Grammar School has added a new twist to the two for one deal, because for the first time in 110 years they have appointed two Head Girls after a dead heat in their election.

Fledgling lawyer Anna Seferta and brilliant mathematician Jiya Jijo will share the role, after they simply could not be separated in a vote of their peers and staff.

To qualify the young women first had to submit a written application, chose a special project linked to our values and explain their reasoning to the School Council, be interviewed by the Headteacher and senior staff and then stand and speak on the hustings in front of the sixth form.

However even after all that, the votes were tied, so Anna and Jiya are happy to share.

Anna, 17, who will champion period poverty for young women from deprived backgrounds, said: “We’ve been friends throughout school so for me I’m really happy I’ve got someone with whom I can share the workload.”

Jiya, 17, who will stand up for dementia care and how to calm anxiety in Alzheimer’s patients, said: “Our role is to enable all the girls in the school to have happy lives and being able to share our success seems the perfect way to start.”

They will have two deputies Elinam Amegadzie, 17, and Lucy Summerell, 16, who may have changed the outcome if they had voted differently, but Lucy admitted with a glint in her eye, “I’m sorry but I voted for myself.”

Headteacher of the leading Catholic grammar school in Altrincham Jane Beever, said: “Not since the school’s foundation in 1910 has Loreto Grammar had two Head Girls, but for me it’s a win win for everyone.”